Skip to content
Home » What Are Jack O’Lantern Mushrooms? 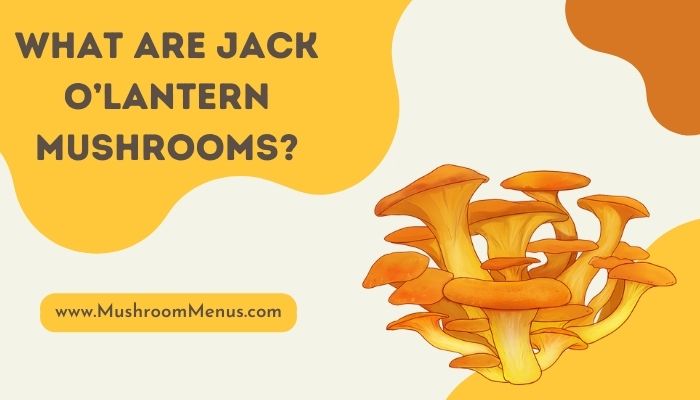 If you are looking for a spooky-looking mushroom species or want to add something unique and deadly to your mushroom collection, you have to come to the right place. In this blog post, we will explore the uniqueness of the Jack O Lantern mushroom.

This strange fungus gets its name from the bright orange color it turns when it’s young. Jack o’lantern mushrooms are found worldwide and popular with mushroom hunters. So let’s explore what makes it a unique one in the kingdom of mushrooms.

What Are Jack O’Lantern Mushrooms?

Jack O Lantern is a type of Saprobic Fungi, and Like we have mentioned earlier, The Jack O Lantern Mushrooms get their name from the bright orange color they turn when they are young. Jack O Lantern mushrooms are a unique type of fungus because of their bright color, and they can be deadly if ingested incorrectly. Omphalotus Illudens is often confused with Omphalotus Olearius, which can always be found with olive trees.

Jack O Lantern is also known as Omphalotus illudens, and it can be found easily grown in large clusters on the stumps, in clumps on decaying stumps, or in buried roots and even buried wood. Sometimes it can also be located on the buried roots or at the base of hardwood trees, especially oaks in the very eastern woodland areas of North America.

Sometimes hunters have also located it in northern and central Europe. However, in areas such as Western North America, the Jack O Lantern mushroom is rare to be found and is poisonous. It can have a flat to funnel-shaped appearance

The Latin version of the Jack O Lantern mushroom is a whole different species with more pale gills. Its Latin name is Omphalotus Olearius. Jack O lantern mushroom’s gill exhibit green bioluminescence when the mushrooms are fresh. The European species of Jack O Lantern Mushrooms consist of a darker cap as compared to the North American one and is the most poisonous one.

Commonly Jack O Lantern Mushrooms have a color range from yellowish Orange to Bright Orange. It commonly has synonyms, including “Agaricus illudens” or Clitocybe Illudens. This mushroom’s cap can be between 2-8 inches, roughly 5 to 20 centimeters in width.

The bright orange color results from the carotenoid pigment, which is also found in carrots. When the mushrooms mature, they will turn greenish-brown, and the caps will flatten out. The stalks will also become hollow.

Their cap can be in a convex shape at first, with a point or bump in the middle. Jack O’ Lantern Mushroom also has spores prints or yellow ecology. Unfortunately, these spore prints are mostly cream-colored, making them poisonous mushrooms.

Jack O’Lantern mushroom is also known for a unique phenomenon called Bioluminescence which is known to cause this mushroom’s gills to become sharp-edged gills or non-forking gills, knife-like gills to produce greenish glow in the dark commonly known as firefox through the help of Luciferin. The Bioluminescense in a Jack O’Lantern Mushroom appears as a blue-green color, and it can easily be observed in fresh specimens in a range of low light conditions.

Jack O’ Lantern mushroom does not have any glow, and the gills are the only part that has the glowing property. This condition is due to the enzyme Luciferase or Luciferin, which makes the gills glow like fireflies.

Another feature can be that the Jack O lantern Mushroom has thin gills that elongate all the way down to the stalk.

Where Can Hunters Find the Jack O Lantern Mushrooms?

Hunters can find the Jack O Lantern mushrooms in moist, wooded areas. They typically grow near the base of trees or stumps. The mushrooms are usually found in late summer or early fall. It is also easily found by hunters due to their glow, and only the gills glow in the dark, which makes it an obvious hunt for hunters.

What Should Hunters Be Aware of When Hunting for These Mushrooms?

Hunters should be aware that the Jack O Lantern Mushroom is poisonous and can cause serious illness or death if ingested. Therefore, the mushroom should not be eaten raw and should only be consumed after it has been cooked thoroughly. Hunters should also avoid touching the mushroom with their bare hands, as the toxins can be absorbed through the skin. Jack O Lantern mushrooms are poisonous and cause mild to severe stomach upset but are not life-threatening to healthy adults.

The mushrooms can be found fresh or dried. They are edible to eat by humans as it does not have any toxin muscarine or are not poisonous. They are not dark in color, and this is what makes humans eat them. Chanterelle mushrooms mostly appear to be growing from the wood or on the forest floor. They do not emit light or glow in the dark like Jack O’Lantern mushroom.

Chanterelles have false gills, which are folds or wrinkles on the underside of the mushroom and are not easily picked off. It has dense clusters due to false gills.

Chanterelle Mushrooms species are commonly confused with Omphalotus Illudens or jack o’lantern mushroom, especially when they appear to grow terrestrially rather than wood. Chanterelle mushroom species will have orange to a light orangey green cap and stem.

The cap is smooth and convex to flat first. However, Jack O’Lantern’s stem is peeled while it is paler inside the stem. Many people have been deceived into eating Jack O’Lantern mushrooms due to their untrained eye for this mushroom. You can find edible Chanterelle in nature other than toxic mushrooms. Chanterelle mushrooms do not have thin gills that run down the stalk. Therefore, they can always be used for eating purposes, such as in making soup.

The Omphalotus Olearius is the name of the Jack O’Lantern mushroom, use in the science field to name different species with their respective names.