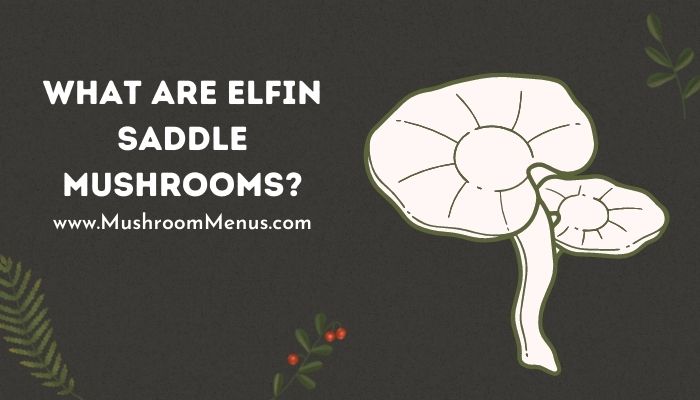 With their warped appearances and irregularly shaped grey cap, this wrinkled, leaden gray or black fungi are readily identified by its unique features.

Elfin saddles grow throughout North America and Europe. They are common and widespread and have been found as far north as Scandinavia and as far south as the Iberian peninsula.

Other names for helvella lacunosa include:

Given their leaden grey color, unusual texture, fluted stems, and preference for burnt ground, it isn’t difficult to see why “goblin saddle” might be a preferred term over the more whimsical sounding “elfin’s saddle.” The cap appears to be something melted rather than a mushroom.

On the west coast, specifically California, they can be found under Douglas fir trees, Monterey pines, and oaks during the late winter.

Depending on the climate, they can be found anytime from late summer to mid-winter in other places throughout the world.

Most helvella species are poisonous, including the elfin saddle mushroom. However, the toxic compounds in the elfin saddle mushroom can usually be cooked out, so it is possible to eat this mushroom. However, if eaten raw, this mushroom will cause gastrointestinal symptoms such as stomach upsets, diarrhea, vomiting, among other unpleasant side effects.

Proper identification is vital given their similarities to the edible morel.

How do I Identify Helvella lacunosa?

Mycorrhizal forming a symbiotic relationship with the coniferous trees under which they are usually found.

The cap usually measures between 2 – 4 centimeters across. They always have a dark pigment that ranges from black to leaden gray to dark brown. The cap is attached to the stem by

The whole fruitbody appears to be one intricately folded thin sheet.

The interesting rubbery stem of helvella lacunosa can range between 2 – 8 cm, and, combined with the cap, contribute to the mushroom’s overall height of between 4 – 10 cm.

They are fluted and folded, longitudinally grooved, and hollow, resembling buttresses and containing hollow spaces.

Because black saddle mushrooms lack gills, the pores cling to the outside of the cap and can rarely be seen with the naked eye.

Helvella lacunosa sprouts throughout the fall and winter, while related species can be found during the spring and summer throughout Europe and North America.

Other Species in the genus Helvella

While helvella lacunosa var is the most common species, there are several related species in the genus helvella that include:

Also known as the western elfin saddle, helvella vespertina is found throughout western North America and is tan or dun in color. They can grow quite large – up to 25 cm in height. Usually found along the west coast in southern California or in the Rocky Mountains.

Also known as the flexible elfin saddle, this species is found in northern and eastern North America, especially in mountainous regions. Edges of the cap fold inward, differentiating them from helvella lacunosa, and are usually tan, yellow, or cream in color. Stems are narrow and flexible.

This species is also called the white saddle, its readily identified pale cap differentiating it from the slate grey saddle of helvella lacunosa. It grows in the eastern United States and has even been spotted in China and Japan. They prefer deciduous trees, especially oaks.

Is it Safe to Eat Elfin Saddles?

Scientists have determined that while elfin saddles are technically edible, they are of poor quality and contain toxic compounds such as carcinogens. They also lack any distinct flavor and aren’t regarded highly in the culinary community, unlike their edible cousins such as morels and chanterelles.

If you plan on eating this unusual fungus, consume them in strict moderation and remember that they cannot be eaten raw – otherwise, you will experience severe gastrointestinal symptoms.

How Do I Cook Helvella Lacunosa?

Parboil fresh black saddle mushrooms in boiling salted water for 3 – 5 minutes. This helps rid the mushrooms of their toxic substance, which will be released into the water. Take the mushrooms out of the water with a slotted spoon and dry them on a paper towel, disposing of the water. Parboiled mushrooms will be safe to eat, both the stem and the cap.

Because lacunosa absorbs water easily, there is no need to soak them prior to cooking.

Once the toxic compounds are eliminated from the fruit bodies, the mushrooms can be deep fried, added to pasta sauce, or simply sautéed. In addition, dried mushrooms can be stored for later use.

They can be added to an asparagus mixture and seasoned with soy sauce as a unique twist on traditional Asian cuisine.

The dark pigment and subtle flavor can add an unusual aesthetic to rice. In fact, rice that is cooked with black saddle mushrooms is called “night rice” and can be a delicious addition to risotto or stir fry. Add slivered almonds for a great culinary experience.