Skip to content
Home » What Are Reishi Mushrooms (Ganoderma lingzhi)? 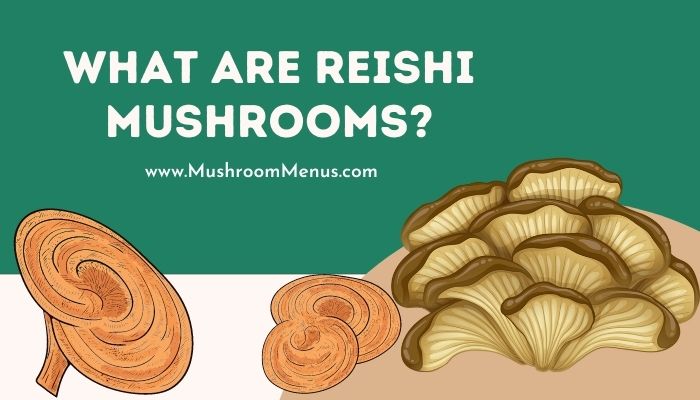 Reishi mushrooms (Ganoderma lingzhi) have been used throughout Asia for their health benefits for hundreds of years.

They are edible, but their tough, corky texture and bitter taste prevent them from the same culinary fame as other mushrooms, such as morels and chanterelles. If eaten fresh, the reishi mushroom has a powerfully bitter taste and, like other wild mushrooms, can cause gastrointestinal distress when eaten raw.

While rare, reishi mushrooms can be found in the wild throughout Asian countries, including China, Japan, Korea, Vietnam, and Thailand. They are typically found growing near or on the bases of maple trees and other deciduous hardwoods. They are usually dark red or orange in color with thick caps shaped like fans or kidneys.

These medicinal mushrooms are hailed for their health benefits and have been found to boost the immune system and supplement cancer treatment for their ability to increase white blood cells and fight cancer cells.

The History of the Reishi Mushroom

The reishi mushroom was first introduced to eastern medicine during the Han dynasty in China more than 2,000 years ago when they were discovered by Chinese healers in the northern Changbai Mountains.

Since its discovery, the reishi mushroom has been mentioned in many ancient medicinal and philosophical texts, such as:

How do I Identify Reishi Mushrooms?

Reishi mushrooms are saprobic, meaning they feed on dead organic matter. This indicates they can be found growing on or near dead or dying tree roots or stumps.

This mushroom is usually a dark, glossy red or deep orange that grows lighter along the edge of the cap. While red and orange are the most common and well-known colors, reishi mushrooms may also be yellow, blue, black, white, or purple.

The cap is thick and flat, with an asymmetrical semicircular shape that resembles a fan or a kidney. When young, the dark cap is glossy and shiny. Older specimens have a duller appearance.

The size of the cap can range from a couple of inches to a foot across, rarely growing larger. The caps are thick but never get thicker than one or two inches. The cap may or may not be attached to a stem.

Ganoderma don’t always have stems, as they are a bracket fungus and a polypore, so they can either grow up from the ground or out from the side of a tree.

The stem, when present, is thick and matches the color of the cap.

Rather than gills, this polypore has tiny pores on the underside of its caps that release its spores.

The spore print is brown.

Tough and woody, like cork, with a bitter taste.

The foraging season for reishi mushrooms depends on the region but is generally through summer and autumn. The varieties that grow in the warmer climates, such as those in the southeastern U.S., start sprouting in May and stop in November.

Reishi mushrooms are found growing at the bases of hardwood trees such as maple, oak, elm, and beech.

Are there Different Kinds of Reishi Mushrooms?

Aside from the Ganoderma ling zhi that grows throughout Asia and the more general term Ganoderma lucidum, other Ganoderma species can be found worldwide.

A few of the many varieties of Ganoderma are listed below. Many scientists believe that the following listed varieties are the same species.

Do Reishi Mushrooms have any Lookalikes?

Despite its striking and iconic appearance, Ganoderma lucidum has a few lookalikes, though none are poisonous.

This polypore is a bracket fungus that is commonly found in North American forests. It shares the same growing pattern as Ganoderma lucidum, preferring to grow on hardwood deciduous trees, and its colors range from brown to red to orange with lighter edges along the caps.

The caps aren’t as thick as those in reishi mushrooms and are instead thin and flexible.

This glossy red bracket fungus is perhaps the most similar lookalike to the ganoderma lucidum, with its fan or kidney-shaped caps that grow outward from deciduous hardwood trees. They are also parasitic and saprobic in nature.

However, the Beefsteak Fungus is seemingly found in every continent except for Asia.

This parasitic polypore grows on birch trees, hence its name, with thick caps that can range from a few millimeters to a few inches thick. It comes in various shades of brown, with some of its darker, smoother fans resembling black or brown reishi mushrooms.

It has been used as far ago as the Bronze Age as a medicinal mushroom, as the birch bracket fungus is high in antiseptic and antifungal properties.

With its glossy red and cream appearance, this polypore may resemble the reishi mushroom at first glance. This red-banded bracket fungus can be found growing on both hardwood and softwood trees.

Chicken of the Woods (Laetiporus sulphureus)

This popular edible mushroom has similar vibrant yellow, orange, and red hues of the reishi mushroom. It is also a bracket fungus with thick, corky caps and grows on both conifers and hardwood trees.

The Significance of the Reishi Mushroom in Eastern Medicine

Hailed for its health benefits and healing properties, patients in Asian countries have been taking reishi mushroom in tea and powdered form for the past 2,000 years.

In traditional Chinese medicine, ganoderma lucidum is believed to align the jing (life force), the qi (energy), and the shen (spirit). Because of this, the reishi mushroom has symbolized success, longevity, health, and divine power.

The reishi mushroom is also significant in traditional Chinese healing for its adaptogenic properties. Adaptogens are, by definition, natural substances that contain biomolecular compounds that help the body and mind adapt to physical, chemical, and biological stress factors.

The health effects of reishi mushrooms on the endocrine system, especially in the adrenal cortex, center around balancing the stress hormones cortisol and adrenaline.

Reishi mushrooms are believed to help optimize the body’s natural stress response, especially when combined with other stress management techniques, such as meditation and mindfulness exercises.

Reishi mushrooms are considered to treat a wide range of health conditions, such as boosting the immune system, reducing fatigue, alleviating stress, and promoting restful sleep. They are also used as part of treatment for a number of health conditions such as:

Both the caps and the stems of Ganoderma lucidum contain beta-glucans, which are essential in strengthening the immune system and anti-inflammatory properties. In addition, Ganoderma lucidum can lower urinary tract symptoms and even lower blood sugar levels.

A 2012 study in the Journal of Mid-Life Health outlined the benefits of reishi mushrooms to men suffering from benign prostatic hyperplasia (BPH), a health condition with symptoms that include frequent urination and decreased urinary flow.

One of the biomolecular and clinical aspects of the reishi mushroom is antioxidants, which promote healthy cell growth and cellular immunity.

Animal and cellular trials have found that reishi mushrooms’ antioxidant properties fight and balance cells known as free radicals, which cause damage to existing cells, such as accelerated aging.

However, before consuming medicinal plants, consult your healthcare provider before starting a reishi regimen.

Regarding the cardiovascular system, reishi mushroom’s benefits include improving blood flow and oxygen absorption to the heart.

Reishi mushrooms may also prevent platelet aggregation, which can cause dangerous blood clots.

Use in Cancer Treatment

Reishi mushroom benefits even extend to cancer treatment. In Asian nations such as China and Japan, reishi mushroom extract is given to cancer patients to supplement standard treatment because of ganoderma lucidum’s medicinal properties.

Ganoderma lucidum’s anticancer effects have been researched in human studies with randomized controlled trials. A 2016 Cochrane Review found that cancer patients who were given reishi extract responded better to treatment and increased immune function.

Reishi polysaccharides are proven to help lower blood sugar, as found in a 2016 South African Pharmaceutical Journal issue. Managing blood sugar can help prevent the onset of diabetes in those with pre-diabetes.

As with any medicinal plant, remember to speak to your healthcare provider before you add reishi mushrooms as dietary supplements. Even natural supplements can interact with current medications you may be taking and cause adverse effects.

The food and drug administration has not approved any health statements, and the medical information in this article does not replace medical advice, diagnosis, or treatment from a qualified healthcare professional.

You should not take reishi mushrooms if you can answer “yes” to any of the following:

Reishi mushroom extract can be taken in a variety of forms, such as:

Side effects of taking ganoderma lucidum include:

Some of these side effects, especially the dry mouth and itching, can be caused by an allergic reaction to ganoderma lucidum. After getting approval from your doctor to begin a reishi mushroom regimen, make sure, to begin with a small dose.