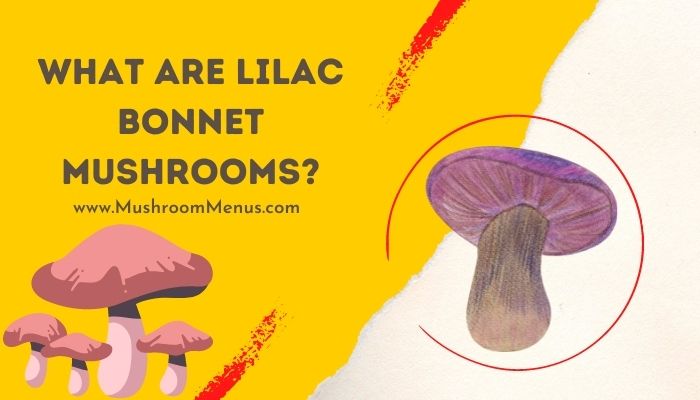 Named for the color of their delicate caps, lilac bonnet mushrooms are one of the many species scientifically listed in the genus Mycena. This mushroom’s rounded lilac cap usually has a white edge, pale gills and can be found emerging from decaying organic matter in both deciduous and coniferous forests. They have also been found in grasslands, such as those in east and central Texas.

Despite its common name, lilac bonnet mushrooms can be white, cream, yellow, pink, pinkish-brown, red, tan, and even blue. Mycologists theorize that the color of this common mushroom depends on how much light filters through the forest canopy.

Fast Facts about the Lilac Bonnet

How Do I Identify Mycena Pura?

Saprobic, feeding on dead or dying organic matter and leaf litter near conifers and sometimes near hardwoods.

The cap can be convex, flat, or distinctly bell shaped in mature specimens. It usually measures between 2 -6 centimeters in diameter. Young lilac bonnets are almost always purple, while older specimens often take on shades of other colors.

When damp, the cap is distinctly lined.

Radially twisted, smooth, and gray, about 2 – 8 centimeters in length.

Lilac bonnet mushrooms can be found almost year round in warmer climates in the spring, summer, fall, and sometimes even the winter.

What Are the Other Mycena Species?

Species similar to mycena pura are:

Where Can I Find Mycena Pura?

Lilac bonnet mushrooms can be found throughout North America, Canada, Britain, Ireland, and mainland Europe. They can be found in coniferous and deciduous forests, though they are more likely to grow near conifers. They’ve occasionally been found growing in grasslands as well as forests.

While the mycena pura mushroom grows in the forests and grasslands of North America and Europe, other mycena species have been spotted throughout the globe. For example, Pixie’s parasol and green pepe are found throughout Asia and Oceania and grow best in tropical and subtropical climates, despite their similarities to mycena pura.

They grow almost year round and can be found in the spring, summer, and fall. However, depending on the climate, mycena pura can sometimes be seen sprouting during the winter.

Their peak season is June through October in cooler climates, such as those in Britain, Ireland, and northern Europe.

Like all wild mushrooms, Mycena pura are sensitive to drought and rainfall. It may be difficult to find them during droughts or years with less rainfall than usual. Conversely, they will flourish during years with more rainfall than average.

Mycena pura contains puraquinonic acid. This compound induces mammalian cells to split into cells similar to granulocyte or macrophage cells. Unfortunately, mycena pura also contains the poison muscarine, which can be lethal to people and animals.

Muscarine attacks the peripheral parasympathetic nervous system. If not treated immediately, the poison can cause a collapse of the circulatory system and death.