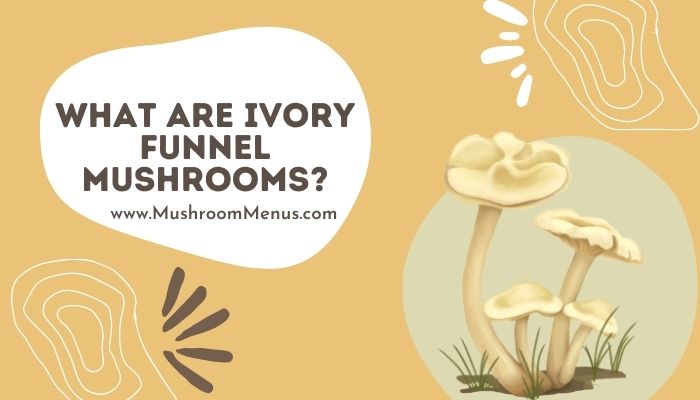 This fairly common species derives its common name for its white or cream color and its funnel shaped fruiting body. It is often found growing in fairy rings in small to medium groups.

They are widespread, growing throughout North America, Britain, Ireland, and mainland Europe. They prefer grasslands with rich or sandy soil.

These innocent looking mushrooms are known as the “sweating mushroom” due to the symptoms of muscarine poisoning that can happen if this fungus is eaten. Like many other poisonous fungi, the ivory funnel contains muscarine. This deadly poisonous compound can cause very unpleasant symptoms such as excessive salivation, increased sweating, blurred vision, severe abdominal pains, and laboured breathing that can result in death.

It can take only half an hour for symptoms to begin. While death is rare in otherwise healthy people, muscarine poisoning is potentially lethal for children, the elderly, and those with heart or respiratory disorders.

The rest of this article will tell you all you need to know about the ivory funnel, other more common poisonous species, and how to distinguish this toxic culprit from edible mushrooms.

Fast Facts about the Ivory Funnel

How do I Identify Ivory Funnel Mushrooms?

Clitocybe dealbata var clitocybe rivulosa is saprotrophic in nature, which means it feeds off dead and dying organic matter such as leaf litter and tree trunks. In the grass, this mushroom is saprotrophic with grass root systems.

1 – 6 centimeters across, flattened with a margin that rolls inward.

Shallowly funnel shaped with a shallow central depression in the center of the cap. Young specimens are typically bright white or cream, while older specimens usually have a slight buffish tinge.

Usually measures between 2 – 4 centimeters in length. Stem is solid in young specimens and eventually hollows with age. It is smooth and flexible. Bruises easily when broken or handled, the white flesh darkening.

Decurrent crowded white gills can be found on the underside of the cap, and they take on a greyish pink tinge with age.

Ivory funnels have a faint mealy odour that is stronger when cut.

Clitocybe dealbata can be found between late summer and late autumn but have been spotted in warmer climates during the winter months.

Like all mushrooms, ivory funnels are sensitive to drought and may not be seen at all during very dry weather. Conversely, years with higher-than-average rainfall can see larger ivory funnel populations.

Ivory funnel mushrooms are found in unimproved grassland, where they are often confused with edible lookalikes. It is common to find edible mushrooms within the same environment – sometimes in the same area – as this toxic toadstool.

Because the ivory funnels grow in similar habitats as white gilled edible mushrooms, proper identification is key to avoid accidentally ingesting these deadly ones.

While only a few mushrooms share such striking similarities to the ivory funnel, some of these species are also deadly poisonous, which makes proper identification that much important.

This choice edible mushroom has a sweet taste that makes it ideal for use in baked goods. It is also used in soups, stews, and can be dried for later use.

Like older ivory funnels, the fairy ring champignon is typically light brown in color, with slightly decurrent gills. They are often found in sandy coastal grassland and even near urban cities. As their name suggests, they are found growing in fairy rings.

This choice edible mushroom shares the same pale cream or white color as the ivory funnel and is considered a delicacy, most often prepared fried in butter.

They grow in fairy circles in grassy areas, causing them to be mistaken for the poisonous clitocybe dealbata commonly.

Their stem is stockier than that of the ivory funnel with thicker cap flesh. The cap is typically more rounded. The spore print is usually white or pinkish white, making spore print identification an unreliable method to distinguish the two species.

This toxic mushroom is one of the most commonly misidentified in North America due to its striking resemblance to many edible lookalikes. The consumer will suffer abdominal pains, diarrhea, and vomiting when eaten.

While there have been severe cases of poisoning, especially in young children, there are no recorded deaths resulting from chlorophyllum molybdites.

The green spore print is one of the best ways to identify the false parasol, as green spores are rare in mushrooms.

There is little evidence to support any claims that the ivory funnel and the fool’s funnel are separate species. On the contrary, most scientists claim that the two are variations of the same species, differing only in habitat.

Clitocybe dealbata grows in humus rich grassland while clitocybe rivulosa prefers coastal dune systems with sandy soil. The environments where the two species are found often overlap, such as in sandy grassland, with the two variations popping up alongside one another.