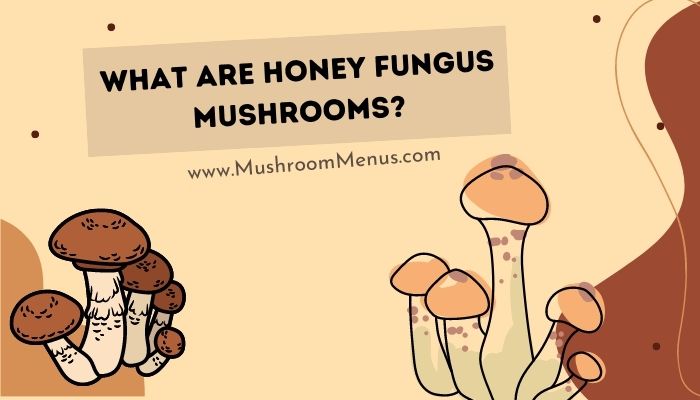 Named for their golden color and delicious smooth cap, honey mushrooms are one of the largest organisms in the world. They are more than seven species of honey mushroom, and scientists believe there are some that have lived for thousands of years. Honey mushrooms are commonly found in Europe and parts of North America – however, they don’t positively affect the forests. When attacked by this parasite, healthy plants wither and die.

Honey fungus is a parasite. It infects tree roots, sprouting a sort of root system of its own called mycelium, which can sap trees of their nutrients. And unlike other parasites which need their host tree to survive, this fungus can grow whether the tree is alive or dead.

Unsurprisingly, these guys are hard to control! This article will cover everything you need to know about these fungi: some quick facts, key identifying factors, and even how to cook and eat them!

Fast Facts about the Honey Fungus

The scientific name of honey fungus is armillaria mellea, which is one of several species under the genus armillaria. Their common name, honey fungus, comes from their golden color. In fact, all armillaria share a common honey hue to their flesh, and it was once believed that they were all the same species. But today, scientists think there are at least ten different kinds of armillaria fungi.

It’s a parasite! This fungus spreads through white spores that are released into the air. Armillaria reproduces sexually – two fruiting bodies pair together to form a new mushroom in the soil. They seek woody plants like shrubs, roots, dead wood, bark, stumps, and trees to grow and spread. The infected plants eventually succumb to the disease and die.

They can clone themselves. If two spores released by the same fungus come in contact with each other, they will form new mushroom! Here’s what’s amazing: that new growth would be a genetic clone of the original!

Honey fungus spreads through white fungal mycelium. You may be familiar with mycelium if you’ve seen something furry growing on bad food in the fridge. Mycelium sort of works like the roots of a tree: it can spread under the soil to seek nutrients. In fact, most fungus comprises this mycelium growing under the soil surface.

Because they can easily spread and clone themselves, armillaria mushrooms can cause the destruction of an entire forest. In fact, this has already happened. In 1998, Malheur National Forest in eastern Oregon was host to a huge growth of armillaria ostoyae, a cousin to the honey mushroom called “shoe-string” fungus. A single fungus had grown over three square miles large! Unfortunately, over one hundred trees were infected and died.

Today, scientists believe that the largest organism in the world lives under the surface of Malheur National Forest. It’s estimated that this armillaria fungus has been alive for thousands of years, slowly growing at ground level and under the soil.

The honey fungus will kill infected trees and infected plants. But contrary to other mushrooms, these fungi can survive whether their host is alive or dead. Honey fungus is a facultative saprophyte, meaning it processes nutrients from decaying organic matter. So a dead shrub, trunk, or root is the perfect place for these guys to grow!

Finally, you can eat them! Honey mushrooms are safe to eat, but they have look alikes that are dangerous to eat, even deadly, So unless you are an expert, don’t go foraging for them! Later in this article, I’ll give you some tips on cooking honey fungus (that you bought from your local food market).

How Do I Identify Honey Fungus?

Whether you are an enthusiast, expert, or novice, here’s everything you may need to know about identifying honey fungi.

As stated earlier, the honey fungus is parasitic. It lives off the host plant to survive. It is often considered an invasive species in many parts of the world and is very hard to control.

The cap of a honey fungus is convex when it is young. As they grow, their caps become conical and may eventually depress in the middle. They usually have a golden yellow-brown hue.

Honey fungus commonly grows with a ring on it’s stem. This ring is golden in color, similar to the cap. Not all armillaria grow with this ring, however.

The gills of the honey fungus grow on the hymenium. The gills are “decurrent,” meaning that they may extend all the way down the ring on the stem.

Honey fungus is sticky to touch when moist. When they aren’t wet, they are mostly smooth. They have very small, fine black hairs that grow on the top of the cap that you can also look for.

These fungi have a district white spore print. Heathy growths will have a strong, thick layer of white spores after twenty-four to forty-eight hours.

These mushrooms prefer a temperate climate and thrive in forested places. They live on multiple continents: in Europe, the UK, Asia, and North America. In places like Germany, Poland, and Ukraine, the honey fungus is regarded as one of the best wild mushrooms.

You can find honey fungus in late summer and throughout autumn. They thrive in cooler, damper times of the year. For example, you can find them growing as early as September in Virginia and as late as January in California.

Honey fungus is one mushroom under an entire family of armillaria. Here are some species similar to honey fungus:

There are some honey fungus lookalikes that you should be aware of. While they may have the same color or shape as a honey fungus, many are poisonous – even deadly!

Omphalotus illudens, otherwise known as jack-o’lantern mushrooms, have many of the same characteristics as a honey fungus. They have a golden-orange hue, decurrent gills, and a convex cap. They grow in clusters too. But jack-o’lantern mushrooms have an orange spore print and often don’t have a ring on their stem. Their flesh is also more orange compared to a honey fungus.

Gymnopilus junonius are also mistaken for honey mushrooms. This large orange fungus typically grows in the same places as honey fungus and has similar features like a convex cap. Scientist believe that these mushrooms carry a neurotoxin – you definitely don’t want to eat these!

Finally, there is the Galerina marginata. It’s commonly called the “deadly galerina” – and despite it’s beauty, this guy is deadly! It contains amatoxins which can be deadly. They can cause organs like the liver and kidneys to shut down. However, they have some key identifying factors! They are usually smaller than honey mushrooms and are very fragile. Compared to the white sport print of a honey mushroom, the deadly galerina’s spore print is rusty brown.

Where Can I Find Honey Fungus Mushrooms?

You can find honey fungus all over the forest floor. The honey fungus often grows on stumps, roots, bark, and other woody plants. They grow in clusters. The more mature the fungus, the bigger it will be!

If you find a patch that you are sure is a honey fungus, look around for more! Infected roots and infected stumps are usually connected to much larger growths.

How Do I Cook Honey Fungus?

Cooking honey fungus is similar to any other mushroom – and they can be just as delicious!

You’ll want to start by running them under cold water to wash off any dirt or particulate. You can do this in a large bowl or cauldron with the tap on. After they’re clean, it’s time to chop them up!

Depending on the recipe, you may want to slice them very thin or in large chunks. This will determine how long they take to cook, so try to cut them all to the same size. Both the cap and stem are edible, so use as much of the plant as you can!

If you were adding these to a soup or cooking them on the grill with other vegetables, this is when you mix together the other foods. Here, I’ll talk about my favorite way to cook them: sautéed!

Set a pan on the stove and set it to medium or medium high heat. Wait for the pan to heat up before adding the mushroom. Don’t add oil yet!

Once you have added the honey mushroom to the pan, you can add a small splash of water. This will actually help release the water inside! Sauté them like this for about five minutes before adding any oil you’d like.

Finally, continue cooking the honey fungus in the oil, stirring occasionally. You’ll know they are done and delicious once they have turned a deep brown color!