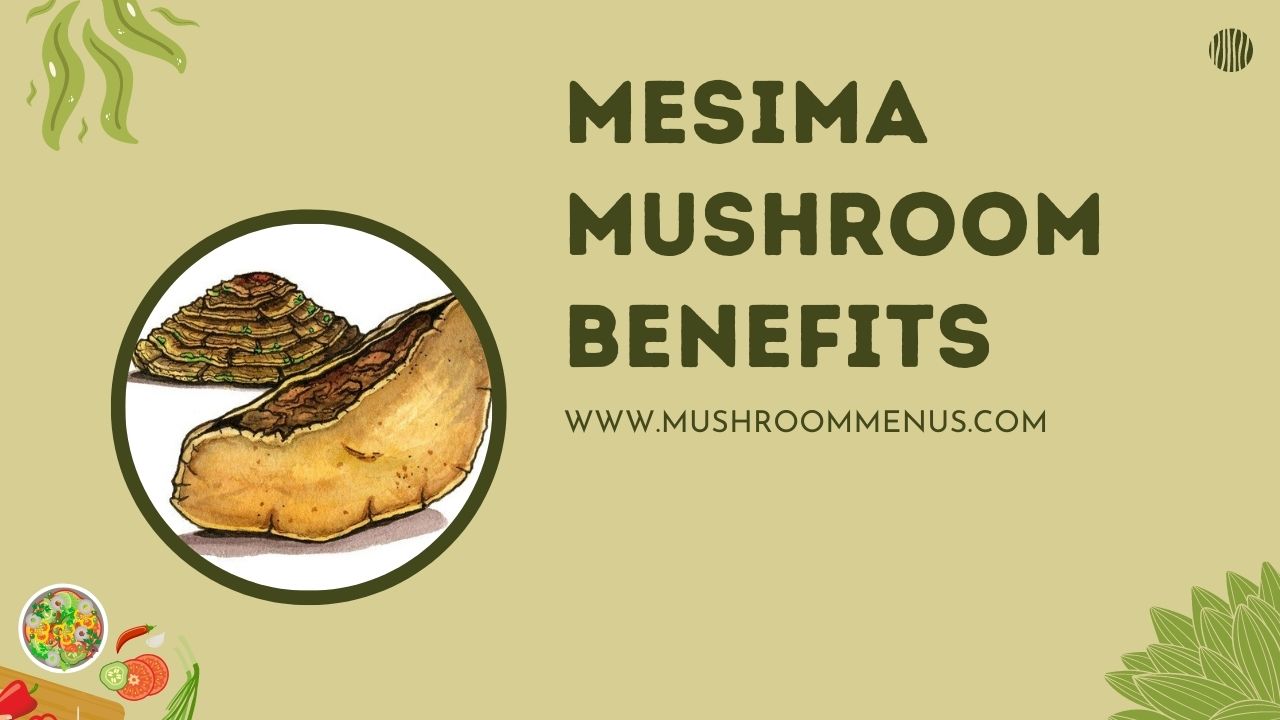 The Mesima mushroom is a fungus used in Asian cultures for thousands of years. It contains several compounds that can help improve your health. Some of these compounds include Beta D-glucan, polysaccharide, and protocatechuic acid. Other constituents of the Mesima mushroom include hypholomine B, davallialactone, hesperidin, and inoscavin.

The Mesima Mushroom: A Cure For Prostate Cancer?

The Mesima mushroom, or Mesimakobu, is a medicinal mushroom found in China. Its water extract has been shown to inhibit the growth of breast cancer cells. In animal experiments, it slowed tumor growth and inhibited breast cancer cell invasion. However, its effectiveness against prostate cancer is questionable.

The mushroom’s antitumor, anti-angiogenic, and immunomodulatory properties have prompted considerable interest, especially in Asia. It is undergoing clinical trials as a potential anticancer drug. It has also been found to be safe for the human body. Researchers at the Korea Research Institute of Chemical Technology, a Good Laboratory Practice (GLP)-certified research institute, conducted tests to determine the safety of the mushrooms for human use.

A clinical trial is underway in California at the City of Hope. In this multi-site trial, patients will be recruited at community practice sites and the John Wayne Cancer Institute in Santa Monica. The National Cancer Institute funds the study. It is expected to enroll 132 male patients with recurrent or active prostate cancer.

It has been revered by the Chinese and Japanese for thousands of years. In ancient times, Chinese Emperors drank tea and concoctions derived from the mushroom. One legend is that the ancient Chinese emperor Qin Shi Huang sent 3000 people to Japan to search for the mushroom. The ancient Chinese believed that the mushroom contained the elixir of youth and would improve the quality of their lives. Today, it is classified as one of the world’s best medicinal mushrooms.

Research has shown that the mesima mushroom is very beneficial to the heart. It can help protect the heart from damage caused by high cholesterol and blood pressure. In addition, it can also reduce joint pain. Researchers have found that the polysaccharides in this mushroom help reduce inflammation in the joints, leading to a better quality of life.

Mesima mushroom has recently been investigated for its potential to benefit breast health. It is known for its anti-inflammatory and polysaccharide content, which may help women maintain healthy breast cells. It has also been shown to decrease levels of cytokines and NK cells. In women, an increased amount of these two proteins can disrupt the balance of sex hormones. Additionally, a higher number of cytokines in the body can affect fertility, reducing the chance of pregnancy. Moreover, an increase in uterine NK cells can interfere with the egg’s implantation and early placental development.

More research is needed before this mushroom can be widely used in the US. However, preliminary results suggest that it can have anticancer and immune-modulating effects. Furthermore, some mushrooms may have synergistic effects with conventional cancer medications.

Mesima has been studied as a possible therapeutic agent for lung cancer, having potential antitumor and anti-angiogenic effects. It inhibits tumor cell growth and reduces radiation-induced DNA damage. In addition, Mesima is known to inhibit cell growth and induce apoptosis. Other potential mesima benefits include reducing the radiosensitivity of HCC.

Mesima mushroom contains a compound that can modulate the immune system and repair DNA damage. It also has hispidin, a resveratrol-like combination with antioxidant properties comparable to vitamin C. As a result, this fungus is often combined with chemotherapy and radiation therapy.

Mesima mushroom is a powerful medicinal mushroom with many uses in Traditional Chinese Medicine. It is known for lowering blood pressure, stimulating the liver’s actions, and enhancing the immune system. It is also effective in relieving nervous tension. In addition, it is an adaptogen, which means it can help the body to cope with stress. It has been used for thousands of years in the Orient for many purposes, including treating cancer. Its active ingredients include Beta-d-glucan, hymenomycete, and caffeic acid. It has also been used as a remedy for irritable bowels and stomach discomfort.

Mesima mushroom has been used for thousands of years in China and Japan, where it has been revered for its medicinal benefits. It is used in Medicine and cooking and is rich in antioxidants, vitamins, and minerals. It is also used in traditional Chinese Medicine to treat cancer and boost the immune system. It can be found dried and sold at health food stores.

Mesima mushroom is a mushroom with a bitter taste used in traditional Asian Medicine for healing. This orange-colored mushroom grows on mulberry trees and has been used for thousands of years as a medicinal food. It has been known to help treat gastrointestinal problems, stave off heavy bleeding and cure menorrhagia. It is now becoming known in the Western world for its benefits to women’s health.

The Mesima mushroom contains a compound called hispidin that has anticancer properties. Hispidin is an antioxidant that is similar to resveratrol. In addition, this compound has antitumor properties equivalent to vitamin C. The mushroom has been used in traditional Medicine for centuries to cure various malignancies, including cancer.

Mesima is a highly regarded anticancer mushroom used for centuries for its healing properties. Despite its taste, it is a highly nutritious superfood and can help with weight management and joint health. It is rich in fiber, protein, and B vitamins.

This mushroom contains a polysaccharide that reduces the growth of melanoma cells in mice. It also inhibits the expression of TNF-a and major histocompatibility complex II, which are associated with inflammatory responses. These findings support its use as a potential anti-inflammatory agent.

The compound found in Mesima mushrooms is a protein-polysaccharide complex with immunomodulatory properties. This means it can up or down-regulate the immune system and repair DNA damage. The polysaccharide complexes also contain hispidin, a resveratrol-like compound with antioxidant efficacy equivalent to vitamin C.

The benefits of Mesima mushroom for rheumatoid arthritis are still unclear, but traditional Medicine has been using it for centuries. This mushroom contains several bioactive ingredients, including beta-glucan, polysaccharides, caffeic acid, and hispidin. These compounds support the immune system and may reduce inflammation in the joints.

Medicinal mushrooms are emerging as a powerful new treatment option for rheumatoid arthritis. They are highly versatile and can potentially address this disease’s symptoms, including pain, inflammation, and fatigue. This means that they can work synergistically with conventional medications.

Aside from being an effective treatment for rheumatoid arthritis, Mesima mushroom contains a significant nutritional value, including carbohydrates, proteins, free amino acids, vitamins, and minerals. In addition, this mushroom is rich in bioactive metabolites, such as terpenoids and volatile organic compounds. These compounds have shown therapeutic potential for anti-inflammatory, antitumor/anticancer, antibacterial, antiviral, and anti-hyperglycemic effects.

A fungus called Phellinus linteus has long been used as a medicinal herb. It has a history in Chinese and Korean Medicine and has been used as a treatment for several ailments. Modern research into the mushroom’s biochemistry and potential as a pharmaceutical drug candidate focuses on identifying its constituents. The mushroom has also been used as a supplementary medicine in some clinical settings, including treating some colon cancers.

The polysaccharides found in this mushroom have immunomodulatory properties. As a result, it can enhance the activity of natural killer cells and help the immune system fight cancer cells. These immunologic effects of this mushroom are auspicious for women since these compounds can help maintain healthy breast cells. Because of this, the mushroom is now receiving more attention for its anticancer properties.

Mesima Mushroom is a natural treatment for autoimmune diseases. Its polysaccharides have several therapeutic effects on the immune system. They can stimulate or suppress the immune system, depending on the species. They may also have anti-inflammatory properties and can protect the liver. In addition, this herb has been used as an adjuvant in vaccines, which may also help suppress the immune response in people with autoimmune diseases and some gastrointestinal diseases.

Several studies have indicated that Mesima mushroom stimulates both humoral and cell-mediated immune responses. This mushroom has also shown promise in treating allergies and rheumatoid arthritis. The Chinese Pharmacopeia recommends a daily dose of ten to thirty grams of dried mushrooms for treatment.

How to Use Phellinus Linteus Extract

Phellinus linteus mushroom contains powerful antioxidants that can help prevent and repair damage to DNA. It also helps to heal the gastrointestinal tract and strengthen the immune system to fight bacterial infections. In addition, its polysaccharides suppress histamine production and promote a healthy immune system. This makes it an excellent option for treating atopic dermatitis and asthma.

Researchers are currently studying Phellinus linteus as an alternative medicine for the disease. In animal studies, it was shown to slow the growth of prostate tumors and prevent tumors from returning. Other studies have shown that the fungus has anticancer properties, including the ability to inhibit the evolution of breast cancer cells and increase the effectiveness of anticancer drugs.

People who are taking a dietary supplement should consult a healthcare professional before using Phellinus linteus extract. Although it is a popular health supplement, it should not be used in place of medical advice. In addition, it is not safe for pregnant and lactating women.

Mesima mushrooms are a fantastic source of micronutrients that promote overall health and longevity. In addition, they are a robust immune system booster and can be used for several conditions. They contain beta-glucans, which fight inflammation, balance the immune system, and activate the immune cells.

The antitumor, immunomodulatory, and anti-angiogenic properties of mesima mushrooms have sparked considerable interest in the scientific community, especially in Asia. In fact, mesima has been studied as a potential anticancer drug. In addition, a recent clinical study conducted by Korea’s Korea Research Institute of Chemical Technology showed that mesima mushroom is not toxic to human cells.

The Mesima Mushroom has long been used as a medicinal mushroom in Asian cultures. This is because it contains numerous active compounds that help cure many illnesses, including liver cancer. These include beta-glucan, polysaccharide, protocatechuic acid, caffeic acid, hispidin, davallialactone, and interfungins A and B.

The polysaccharide krestin, found in the mushroom, stimulates both humoral and cell-mediated immunity. This action inhibits the growth of colon cancer cells. Other beneficial effects include protection of the brain and liver from damage. In addition, Mesima Mushroom has anti-inflammatory and antiviral properties, making it an ideal treatment for cancer patients.

The cell wall of the mushroom is made of chitin, similar to that of a lobster shell. This fiber is indigestible by humans but is rich in bioactive -glucans and polysaccharides. These compounds are extracted through different methods. One method is hot water extraction, which breaks down the chitinous cell wall and releases the bioactive polysaccharide. Another method involves alcohol extraction.

The Mesima Mushroom is a natural remedy to help control excessive bleeding during your monthly cycle. Asian cultures have used it for thousands of years. It is orange-colored and grows on mulberry trees. It has been used as a medicinal mushroom for various ailments, including menorrhagia and digestive problems. It is now gaining popularity in the western world for its many health benefits, including control of monthly bleeding.

Mesima Mushroom contains resveratrol-like compounds and may help control your monthly bleeding. In addition, it is a safe, natural remedy that can improve your immune system. The mushrooms have antibacterial, antifungal, and anti-inflammatory properties, so they can help you feel better in general. The mushroom is also known to have antioxidant properties.

Mesima is a mushroom cherished for thousands of years in Japan and China. In ancient times, Chinese Emperors and Japanese royalty drank concoctions and tea made from this mushroom. The old Chinese Emperor Qin Shi Huang sent 3000 people to Japan to hunt for this mushroom, which they believed contained the secret to eternal youth. This mushroom was considered so potent that it is classified as a superior medicine in Shen Nong’s Herbal Classic.